Seeds of an idea for leaders in urban regeneration to debate current issues were sown at the Revo Regeneration committee earlier in the year and spearheaded by committee members and event sponsors Sara Boonham (Gleeds), Cat White and Andrea Arnall (Turley), Stuart Harris (Milligan) and John Percy (Montagu Evans).

The roundtable discussion saw commercial and residential developers, public sector bodies, investors and consultants come together to discuss the challenges and opportunities for urban regeneration. We share the main discussion points below.

Paul Hanegraaf, Creative Navigator from Milligan presented some thoughts on how the Property Industry has traditionally approached regeneration and asked whether we need to adopt new ways of thinking: or more accurately to move from the tired and predictable “I think!” to more the more enquiring “I wonder?” thereby generating more innovative solutions for the creation of thriving High Streets and Town Centres.

He talked about the overlapping aims that underpin regeneration:

So what makes a successful place? Some answers can be found in projects such as Riverside Sunderland and Copr Bay in Swansea where change is happening driven by a clear-vision and political will and critically the consensus was that local buy-in is essential to delivering places that will thrive in the long term. 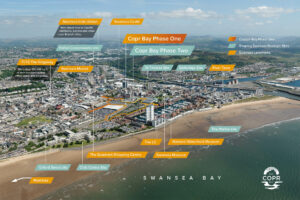 Ultimately going out and making things happen is critical for success. The question was raised, citing Sunderland as an example: “did they work so hard to seek change and collaborators to make it happen because they had no choice?” That may well be true, but doing nothing would have made a bad outcome inevitable. Some local authorities, have been known to sit back and expect developers and ideas people to come to them. Places cannot stand still and those with a vision, political will and local-buy in will reap the benefits.

How is a vision translated into a plan of action and what form should it take? With large projects often conceptualised, designed and delivered over many decades can a masterplan ‘set’ many years ago deliver for the here-and-now?

Visioning exercises or regeneration frameworks with less of a spatial emphasis than the traditional masterplan were cited as having more relevance today..

Whilst often picked as a scapegoat the planning system was actually identified as possessing enough flexibility when used properly by a participatory local authority. Masterplans or regeneration frameworks do need a level of ‘approval’ from stakeholders but need not form part of the statutory planning framework.

By contrast the Local Plan system in delivering regeneration in centres was seen as increasingly irrelevant (not to mention slow) and discussion pointed towards a non-statutory, speedier solution, produced in collaboration with stakeholders.

Developer and local authority teams have made changes to take on board the quirky outcomes of the community projects and create a formula for a success and create spaces that will thrive? There are great examples from Revo’s recent Celebration of Place Campaign. For example Altrincham’s Not So Secret Garden exemplifies certain key features. Delivered swiftly and acting as a definite statement of intent for the larger Stamford Square scheme it forms part of.

It gave back a sense of pride to the community generating a space that is theirs. Notably it is also free-to-use, making it both accessible to all and an asset for the ‘dwell time’ and ‘stickiness’ that town centres need. 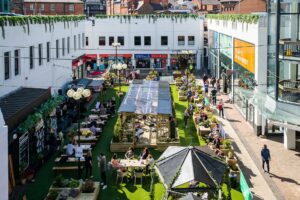 Building typologies can also be redefined as well as transformed. Re-thinking combinations of activities that will attract different groups of people: young and old; public and private sector; established companies and start-ups can add diversity of thought and outlook.

Our role in regeneration should be to focus on the places we help create – the spaces around buildings as well as the buildings themselves were considered equally important, particularly the role green spaces play in promoting wellbeing and allowing for social interaction, often for free.

Who pays for these spaces when they don’t generate a financial return? And what type of partnership needs to be in place to deliver social value of this type? These don’t always require the wacky or the extreme as some seem to think. Sunderland’s new City Hall, for example, is a purpose built civic-hub with all the usual councils services but also houses event-spaces, a wellness centre and is a workspace hub with lettable office accommodation.

Whether a ‘traditional’ masterplan route is adopted or alternatives such as the framework is preferred, successful developments will need more esoteric/organic thinking: it can’t all be predicted from the outset. Starting with a well-curated set of consultants can be a big plus.

The discussion moved to viability and the process of delivery becoming more complex and challenging. Increasingly it is becoming necessary to take a longer-term view of regeneration, and with a far broader range of stakeholders to share the risk. Local authorities and public-sector bodies such as Homes England and Network Rail have an important role to play in releasing land and delivering development. New thinking is an essential component in how we adapt.

The table considered the pros and cons of the sustainability of wholesale demolition. The Call-in of the M&S on Oxford Street has highlighted the risks and the strength of opposition from heritage lobbyists as well as those looking for a lower carbon future. It will become increasingly difficult to justify the impacts involved in wholesale demolition whilst the industry adjusts to the very real constraints of repurposing existing assets. What new tools do we need to make repurposing a viable option? And does the industry need Government funding to bridge the gap?

The table talked briefly about the now defunct Investment Zones and how they might have differed from Enterprise Zones. All eyes are now on the next round of Levelling Up funds, due in January 2023, to help boost under-performing centres. Next year also offers the prospect of more planning reforms in a considerably delayed new National Planning Policy Framework.

The experience and numerous projects undertaken by the round-table contributors had one consensus . For transformation to succeed collaboration is key and at its most basic level collaboration is only achievable when the parties involved want to co-operate. Without that bedrock there can be no progress.

The two pillars of our topic can be condensed to process and product. For the former the factors mentioned over and over were the need for flexibility, adaptability, political will (and stability) and a certain fearlessness. If a city or district somewhere wants to make a change for their area, they must have a vision and work towards it diligently.

Product-wise it is often the loss-leading public infrastructure elements like the pocket park or playground that sets the right tone in the public’s mind. The value of such elements is difficult to quantify and over-reliance on the private sector to deliver them solely as planning gain isn’t helpful.

The panel were vociferous in noting the importance of public/community space as a key ingredient in the transformation recipe: often are the heart and soul aspects of an area.

Individual retailers or leisure trends may come and go but the social value of public space cannot be stressed enough and should be championed by all sides in the re-development world whether they are addressing thousands of acres of former railway land or a modest locally-driven scheme.

Hand in hand with this maintaining such spaces was noted as being a critical part of long-term: the gradual diminution of neighbourhoods via neglect and funding cuts is often the first step towards the need for another round of transformation.

It was intriguing to hear mention of a local authority subsidiary set up to promote residential development gradually shifting to a guardianship role of ‘place’ to ensure that this rot doesn’t set in again.

Above all there must be a local element to the process and a sense of individuality and identity. As one of the panel wisely noted space must be left “in the plan for the locals to colour in.” Only then will communities feel that they can take ownership, enjoy and grow with their transformed places, which is the real purpose of this process.

What was very clear was that each of the topics would warrant a full session and you can look forward to further curated discussions hosted by members of the Committee during 2023.